(Triple vinyl tracklist is in a somewhat different order)

When I first discovered Riverside, I really had no idea what I was getting into.  I was astonished: this music grabbed me in a way none ever had before — emotionally, intellectually, even physically – I listened in an enraptured transcendence that never seemed to fade.  A friend of mine likes to say: “The music of your life will find you”, and it was only with the discovery of Riverside and Lunatic Soul that I truly understood what he meant.  I’d listened to and loved a lot of music and artists over the decades, but nothing like this.

I eventually realized that I had also become part of an extended family, that there was a real connection – something I had never experienced before – between the band and their fans, and the fans with each other.  We shared anticipation, accolades, joy, and alas, the tragedies.  In this year especially that connection became manifest, where we came together, sharing our shock, our loss, our memories.  The line between the band and the fans blurred in the tears.

I discovered the experimental side of the band early on with the REM bonus material, and those tracks became among my favourites from that album. Fast-forward to the release of Shrine of New Generation Slaves and the spectacular “Night Sessions” bonus tracks: surely here was a direction that the guys should explore — in fact it would almost be criminal if they didn’t. Of course, the “Day Sessions” tracks just reinforced this. Piotr Grudziński was openly eager to do a dedicated ambient experimental project; his excitement was palpable.  And then, it became a reality.  The guys – at least Piotr, Mariusz Duda and Michał Łapaj — headed into the studio to make this special album, this anticipated addendum to the Riverside discography.  Good news indeed. 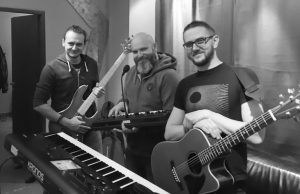 Then…early in 2016 came that devastating blow to band and fans alike; and instead of being a celebratory exploration of a beloved genre of music, the project became a memorial.  A poignant tribute to an unfinished journey, a legacy of love and loss.

Eye of the Soundscape consists of the collected “Sessions” tracks: the two “Night Sessions” from the SoNGS bonus material, and the five “Day Sessions” bonus tracks from Love, Fear and the Time Machine, as well as two remixed songs from the REM era: “Rainbow Trip” and “Rapid Eye Movement”.  These latter tracks have not been changed in any significant way, but the remixes bring a much-needed life and vibrancy to them. (My REM II discussion can be found here, “Night Sessions” here, and “Day Sessions” here).

Along with this collated material are four new songs, the last things that Grudziński ever recorded, in the days before he died.  Even though there are only four of them, they manage to run the gamut from bright, heavy, almost industrial electronica to pure sweeping atmospheric washes of sound.

“Where the River Flows” was released as the album teaser; it is longer than the average single, but there probably could not have been a better choice to introduce fans to what was to come.  This track hits all the highlights  – starting out smooth and electronic, then with the programmed drums kicking in and that characteristic Gru guitar sound, and from there it builds — percussive and urgently heavy, with clear nods to the great electronica of the 1970s, restless guitar and great synthesizer swoops and noodling; and ending with a gorgeous, wordless, repeating vocal theme.  As unapologetically electronic as it is, this song has “Riverside” written all over it.

“Shine”, a remarkable track, released as the single, is my favourite: heavy and rhythmic, featuring Mariusz behind the drum kit as well as on bass, providing the unstoppable motive force that drives the track along while the synths and keys expand, contract and swirl around, filling in the space.  The song is compelling and relentless, downright addictive; the only thing wrong with it is that it is just not long enough.

“Sleepwalkers” is supple and upbeat, with lots of percussion; sonic washes behind a throbbing electronic rhythm, distorted guitar melody…this time the synths dominate, and wordless vocals punctuate the entire track. “Sleepwalkers” is the thread that connects the early experimental sounds of REM II with the latest tracks.

Finally, the album’s title track: this one is a pure, no-holds-barred ambient mood piece. Long, sweeping, and dreamy; rhythmless electronic washes and tides, Tangerine Dream meets Eno, Phaedra on Another Green World, echoes of “Echoes”….  Some may find this track a bit too far down the ambient road, but the fact that they pulled it off so seamlessly proves how deeply embedded this style of music is in the genetic makeup of the guys.

Now that this material has been gathered together, we can see how the ideas have developed over time – the REM songs were certainly different from the rest of the Reality Dream material but retained the proggy fundamentals of that particular Riverside era.  The “Night Sessions” were a real departure though, wandering far afield from the overall feel of the main SoNGS release. By the time the “Day Sessions” arrived, there was no doubt about the band’s confidence and enthusiasm.  The new tracks are a natural evolution, even more accomplished and celebratory.

At the moment fan response to Eye of the Soundscape seems to be mixed, but I feel that people should not expect too much from this album.  It is not new music, really; and when you get right down to it, barely Riverside: Piotr Kozieradzki drums on one track out of the 13 here.  I think that relatively few fans will be completely unfamiliar with the songs, even if many might have missed a bonus disc or two.  I know that Duda has stated that one aim of the album was to introduce this aspect of the band to more casual fans and listeners, but frankly I think the album is going to appeal mostly to collectors and die-hards, people who have been intensely involved with the band over time.  And that is because the album will resonate the most with people like us, the Riverside family, as a memento of a beloved member no longer with us.

In the end, Eye of the Soundscape is a tribute album, a farewell not only to Grudziński but to a whole musical direction the band may well never approach again.  This makes it difficult, and perhaps even pointless, to try and rank it amongst the rest of the Riverside discography.  It is both an end and a beginning, a pivot-point, if you will, as Riverside sets off in its new direction as a different band.  And yet – for all that – the family will stay together.  We will be right there along with them, sharing in their journey.

4 thoughts on “Eye of the Soundscape”